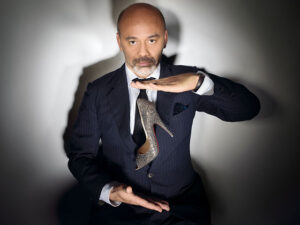 If you want to be talked about as an extravagant person, it is inevitable that you must obtain clothing and shoes to suit your style. And this will definitely happen if you choose one of the best shoe designers – Christian Louboutin. His brand is synonymous with extravagance and let’s face it – crazy shoes. In his women’s shoes the current is not less than 15 cm. So if you see in a movie or music video the star to walk with heels in the air, surely the designer who produced the shoes for it is precisely Christian Louboutin.

Born in 1964, which makes him one of the youngest designers who has reached the tops of fame. In 1975, at the age of 11, he is fascinated by a strange picture of The African Art Museum in Paris – a women’s shoe with a sharp current which is highlighted with a red line. Since then started his passion for design and fulfillment of women’s whims.

Between 1980 and 1986, he works at his first job as an art designer of musical halls. He is also a freelance designer and has worked with such names as Yves Saint Laurent, Chanel and others.

In 1989 Louboutin turns his look at garden design.

In 1992 Christian Louboutin opens his first boutique in Paris with his own shoe brand.

In 1994 he opens his first New York boutique with brand shoes. After many awards and cooperatives with young designers, today his shoe brand is recognizable worldwide. His shoes can be found in 48 countries around the world in 20 boutiques. Now he continues to create shoes for young and talented designers.