The first impression that these men’s shoes make is of a crocodile biting the leg of the one, with which you have met. Really spectacular shoes. Probably also very expensive because as the appearance suggests, they are made ​​of genuine crocodile skin. It is true that the teeth facing the top of the foot are nothing more than an imitation, but the effect is striking. Really at first one may mislead. 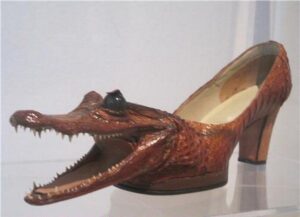 The shoes are made in an elegant style, making them a suitable completion of a formal men’s outfit, but not strictly tuxedo or something official to say. Rather, of the type black pants with a shirt, casually unbuttoned at the neck, is suitable for this type of footwear.

The interesting scales that constitute these shoes make them, ones which everyone would stare. The insole of the shoe is made of natural, high quality leather, which allows air circulation and prevents overheating and unpleasant sweating, followed by the “divine” scent.

The sole is made ​​of rubber, which allows the shoe to bend easily. So light that you will hardly feel it on your feet. As well as your pocket, which can become a lot lighter. But the beauty wants victims and men love to sacrifice. 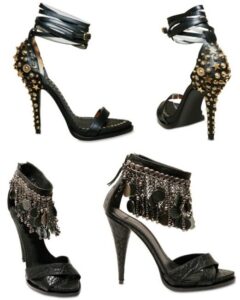 The following types of sandals are great supplement for each formal dress. Gold and black or silver and black leather, just classic in the formal clothing or shoes.

Both pairs would be more suitable for short dresses, because of the incredible decorations that should not be hidden.

The second pair is a bit more decorated, but everyone has their own taste and style, so combined with proper selection of clothes, it would make every female foot simply irresistible.

Both pairs are with high heels which make the legs even longer. So in terms of esthetics there would be no problem. The question now is whether and how long you can endure on high heels. Due to which many dancing is not recommended unless you are trained in such walking with “stilts”.

But it is quite normal such beautiful things to attract us, even though sometimes they are not very comfortable. Because the sandals are rather formal and are supposed to be worn only for important events and for no more than two or three hours, maybe it is worth the inconvenience for one night but you will look stunning.

Both pairs are made of high-quality leather still we are talking about Givenchy, and they would never mislead their clients. So boldly dress your gown and choose the asterisks or the ones with decoration for the legs. 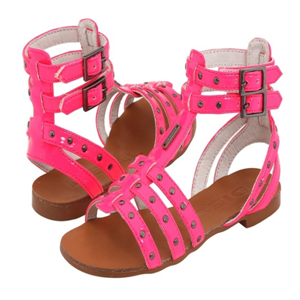 Although the rains drowned us these days, it would not hinder us from walking fro with slippers or sandals on bare feet. The rain, typically for the summer is warm and is more an amusement rather than an annoying event.

That is why perhaps your child would be very pleased if it is possible to step into each formed puddle after a heavy rain. And for you not to be too angry, we would recommend some quality leather sandals, on bare feet and thus you will not wash any socks, nor the slippers or sandals will unstuck. Well, you may need to wash some clothes, but this is another topic.

The following sandals are one of the cutest we have seen in the fashion collections of the famous designers and brands for this season. Bright, shiny and comfortable – what more could a mother want for her little girl. Furthermore, it is unlikely for them to harm the delicate child’s feet, and they will be your girl’s favorite for the bright pink or yellow colors in which they are offered. As you know, small children love the bright and colorful objects. These sandals are very comfortable and they hold the ankle of the child in the right position and thus will not allow any unpleasant injuries as the kid plays in the hot summer days. As we mentioned they are offered in two very fresh summer colors – pink and yellow and they can be easily combined with almost all the clothes in your child’s wardrobe.

The sandals are made of high-quality natural leather and rubber sole, which is completely flat and is not likely to burden the child’s foot. They are also conveniently fastened with metal buckles on the ankle, which prevents from slipping or taking off at any time as small children like to do. 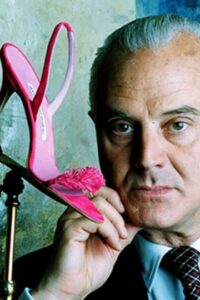 Shoes, same as clothing need their own designer. In the fashion world there are several names that left a lasting mark on the industry for both shoes and clothing. Despite the many “youngsters” some of the older generation will always be on the first line, first to instruct the young and second to remind customers that classic has no age.

We will introduce you to the most famous shoe designers whom since their inception and market penetration have left a lasting trail to follow and be recognizable. Their shoes are expensive, qualitative and wearing them, means that your standard of living is high.

We start with Manolo Blahnik. Name which some of us can hear only on those elaborate series in which the character necessarily has 2-3, and why not 20 pairs of these shoes.

His career began exactly 30 years ago. During this time, his shoes have come a long evolutionary path, and what is more important, today he is the most amazing shoe designer who can easily win the heart of every woman.

Born in the Canary Islands, with Spanish mother and a Czech father, he began to study languages ​​and art in Geneva, before moving to Paris in 1965, because he wanted to become a stage designer. But in 1970, when he visited New York, making another stage, the then editor of Vogue – Diana Vriyland after seeing his designs for stage scenes and accessories, turned his attention that he would have much more success as designing shoes and notably focus in this art.

Manolo learned the art of making shoes with the help of the studies he made in different shoes factories, from the conversations with the operators of shoe machines, leather handlers, finishers and technicians. 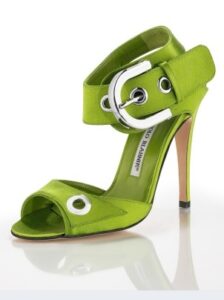 In 1971, he made shoes which then the best designer in London – Ossie Clark used for his collection. Since then his star started rising. Two years later – in 1973, Manolo Blahnik opens his first shoes store in Chelsea, London.

Since then Manolo Blahnik is synonymous with quality and style. His love for shoes and making women happy won him so much glory. Of course, his talent makes a difference. His words are: “Shoes, they transform the woman.”

This logo can be seen on each of his shops.

And you bought your next pair of Manolo Blahnik?

Yes, you read the title right. We decided that we cannot look ahead in the fashion trends of the shoes without looking at the fashion collections from the past. Therefore, we turned to the collections of Prada and came across these beautiful stiletto shoes. 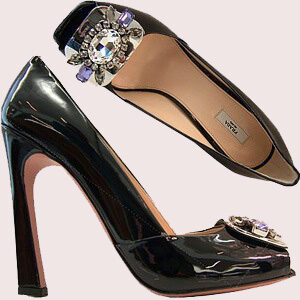 The are stylish, black, patent leather and leather, with a large crystal and very high heel. Clearly, these are formal shoes with which every woman can impress all the guests at any official event. They can be combined very well with an elegant formal dress and since they are adorned with a large crystal, the outfit can be with a more simple design.

Perhaps the most inconvenient in this case is that at the front of the shoe, there is no platform to hold the foot so that there is no additional burden. Simply at one point as your fingers are standing flat and calm, suddenly it appears that your heel is at an altitude of 20 cm. Really quite impressive but also painful in our opinion.

Anyway we could say that the materials are natural, something that does not need persuasion when it comes to Prada. The current is stable and strong and you may not know how to stand on it much but at least it will not betray you and break traitorous.

The insole is made of natural calf leather and prevents from unpleasant sliding, when and if the foot sweats. Overall a good quality shoe that makes your calves look more elongated and charming. And an essential ingredient of the saying “Beauty requires sacrifice”. But as we all know, we ladies make a lot of compromises in order to look good. In this case, you are sacrificing your feet, and if it’s worth it you can decide yourself.